I don’t know what we were thinking but we bought a house that was built in 1820. Turns out though that it is pretty cool and has a lot of history.

To put this in perspective, the Civil War will not start for another 41 years and Napoleon was running around in battles!

The house was originally built by Darius Carter in 1820. He was the son of a Soldier in the Revolutionary War Samuel Carter.

Here is a lithograph we found in “History of Ontario County”

Here are some journal writings from 1892

The Descendants of Some of East Bloomfield’s Pioneers – Editor Journal: Two or three years ago there was an article published in the Journal, giving a brief sketch in relation to various matters in this town, some of which suggested to the writer a few items not mentioned therein. For instance, the first descendants of the pioneers of the town are very few among us; and as we laid to rest a few days ago our esteemed and very useful fellow citizen, H. W. Hamlin, whose parents were among the first who came into this town (about 1798), we could but think of the fact that only a few of his contemporaries were left to us: Hiram Steele and Gary Collins, both 85 years old; the former as active as many of our young men; the latter more infirm and the last of his father’s family. Gaius Adams, grandson of Deacon John Adams (who came to this town in 1798, with a family of six sons and four daughters, and first settled on the east side of Mud creek, near what is known as the Daniel Johnson place), is nearly four score years old, and though just having a hard time with the grippe, bids fair to stop with us a while longer. Again, Darius Carter came here in 1811, built a large brick house near the depot, in which he kept a hotel for many years; he died in 1832. His family of nine children have all passed away, Mrs. Weda Munson, widow of Harlow Munson, (who was our sheriff in ’62-5, ) a most estimable lady and neighbor, whom we remember from our very childhood as one whom old and young, alike, most highly esteemed in all the relations of life. And, also, as we call to mind such men as Moses Fairchild, Martin Haywood, Josiah Porter, (who for the last thirty years of his life was justice of the peace in our midst); Timothy Bell, Anson Munson, Israel North, Daniel Rice, senior, and others too numerous to mention, all of them men of the most strict integrity and perseverance in the right.

A sense of loneliness comes over us at times, and we cast about us in vain for some one to fill the place of each of the departed, but no one has as yet put in his appearance, and probably never will. These first descendants of the fathers left an indelible impression of character and works which remain with us to the present time, but, of course, shows less and less each succeeding generation. Although these changes are going on everywhere, they are not always so marked and suggestive in matters of general interest as in our churches. One thing more, which is pleasant to think of, is our abundant supply of the necessities of life, and the disposition of most of our people to secure them by habits of industry and temperance; only a few among us do otherwise. We have in town today about ninety-five persons whose ages range from 70 to 93 years. We buried in ’91 but three octogenarians and one non-octogenarian.

Here is a newspaper article about his death:

DEATHS.  In East Bloomfield, N.Y., on the 27th ult. [April 27], Mr. Darius Carter, aged 59 years, one of the oldest, and at the same time one of the most efficient members of the Universalist society in this town. Mr. Carter, in an early day, emigrated from the State of Connecticut to this place—and by a course of industry and economy almost without a parallel, he succeeded in accumulating a handsome fortune, of which he was never sparing in the support of a cause which he believed to be a good and righteous one…  And though, for want of an opportunity to sustain the true Gospel of universal benevolence, he did for many years support the Presbyterian church, yet he never believed their creed consistent, nor could he ever reconcile the doctrine of endless misery with the boundless and tender mercies of God, and therefore rejected it as unreasonable .… For a time the few avowed Universalists in this town made it their practice to attend the religious service of our order in the neighboring town, which being observed by Mr. Carter, he inquired of them why they did not attempt to procure preaching of their order in their town, rather than go abroad for it.  The reply, if I mistake not, was that could they obtain a preacher, they knew of no suitable place or room in which to hold their meetings.  This being the only obstacle in the way of the proposed trial, Mr. Carter generously offered a spacious hall connected with his own dwelling for their use, which was opened, for the first time, to the writer of this notice, on the 28th of June, 1829, and again on the 2d of August, in the same year. Subsequently, the hall was occupied by Br. O. [Oliver] Ackley for one year, once a month. Like every other person under the influence of true candor and Christian meekness, Mr. Carter only wanted to be informed what Universalism was, in order to embrace and openly defend it.  He embraced it with his whole heart, not in theory alone, but in practice also…  He was sincerely and understandingly devoted to the religion he had espoused, and though he paid all required attention to the subject, yet he was never known to neglect any thing connected with the true interest and happiness of himself, his family, his friends and neighbors.

This last sickness, which terminated in typhus, it is thought was superinduced by the active part he took and to the exposure to wet and cold to which he subjected himself in forwarding the meeting house now being erected in this place.  His illness was not protracted, nor so severe as in hundreds of other instances.  He was sensible to the last, and perfectly conscious of his approaching exit, and withal, ready and willing to obey the mandate of his Creator, to leave this world of mutation for one not subject to change. He has left an affectionate family to mourn his loss; but they do not mourn with destitution of hope—for while their loss is temporary and limited, his gain is substantial and enduring. His funeral services were attended in the Presbyterian church, a very spacious building, which was filled in nearly every part of it, by all the different orders of professors [people of different faiths] in town, thus evincing that respect for the deceased to which his virtues and his worth had so eminently entitled him.

This contribution was kindly donated by Karen Dau, Rochester NY

Here is an article from “Memories and Traditions of Bloomfield” about how our house was built as a Tavern by Darius Carter.

The Burlington Insurance Agency occupies the brick building at 9 Main Street in Holcomb which was originally built for Darius Carter as a tavern. Mrs. Ann Bradley, granddaughter of the Carters, wrote: “Once during the war, an officer strode into the basement kitchen of the tavern and demanded a loaf of bread, in a very pompous manner. When Mrs. Carter asked him what size he replied still with a pompous, self-important air, “O, the largest size you have!” Mrs. Carter, thinking to make him regret his imperiousness, brought out from the pantry an exceedingly large loaf baked in a big, round earthenware pan. It is said the offended officer was too proud to refuse the loaf and was Compelled to take it.” Mr. Carter kept the tavern until his death and it than sold to the Prindle brothers. The house was reopened as a hotel by Frederick Collins in the 1850’s when the railroad came to town. In the 187Ο’s the house was the home of Hiram Holcomb after whom the village is named.

Pictures from across the street from our house 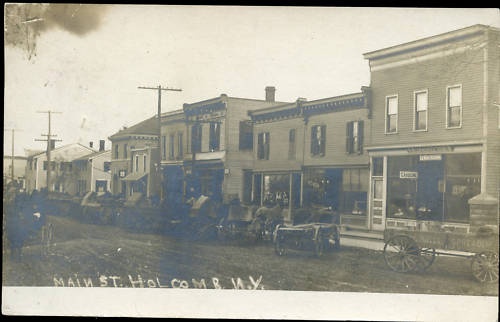 Here are some pictures of reviving my picket fence.